2018.02.13
Winter Camp｜Consolidated the Hope Base of the Ice Hockey Power, and 2018 O.R.G.·Boston Winter Camp Was Successfully Ended 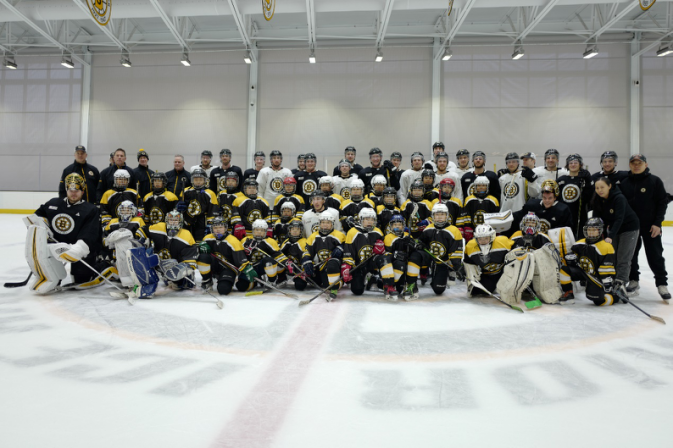 On February 12, 2018, as winter campers flew back to China, O.R.G.· Boston Bruins Winter Camp officially came to an end. During the 11-day winter camp, compact substantial ice hockey training life had significantly improved the children’s ice hockey skills, and allowed them to broaden their horizons and grow their experience under the influence of the rich ice hockey culture in North America. In particular, the concept of “Happy Ice Hockey” was reflected in training and matches, which greatly enhanced the campers’ love and confidence in ice hockey. Although it lasted for only 11 days, this temporal team was more like a big family that loved each other. The warm, peaceful, united and friendly warmth were always around. Whether it was the full devotion of hockey minors to the training and competition field, or the tireless efforts of the Chinese and American coaches; whether it was the earnest instructions of legendary stars, or the close attention paid by teachers, students, coaches and team members of hockey minors, or the silent efforts made by parents and staff, all these lively faces propped up the backbone of this winter camp event. 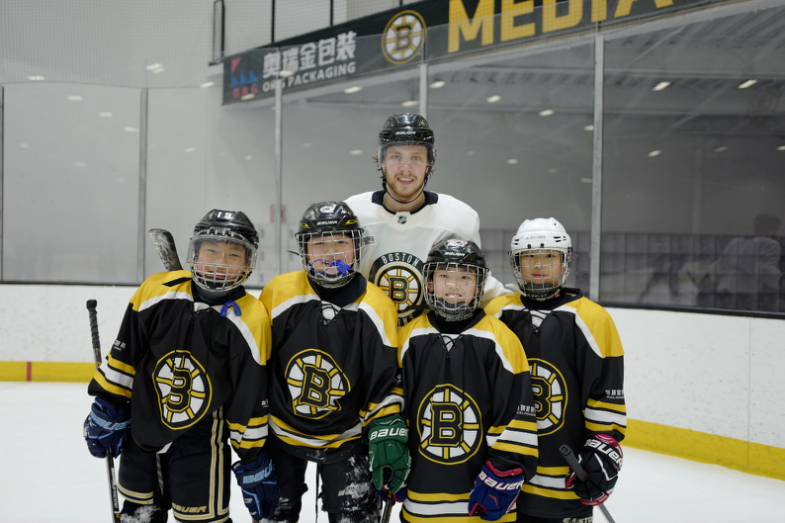 For hockey teenagers, being able to go to the NHL was not only because it is the world’s top professional hockey league, but also because there were favorite stars or a role model. Many ice hockey boys dreamed to have the chance to meet face-to-face with these stars. Therefore, the biggest feature of O.R.G. ice hockey winter camp was to arrange campers to watch NHL team training and interact with the stars. On the last training day in the winter camp, the campers realized their dreams. At the moment when the stars of Boston Bruins such as Pastrnak, Rask, Marchand and Chara appeared on the ice rink, the sky above Warrior Ice Arena was covered by the cheers of campers. By closely watching NHL players to meticulously slide, shoot, pass and do other training under the coach’s arrangement, the campers have a deeper understanding of the enthusiasm and dream of ice hockey sport. 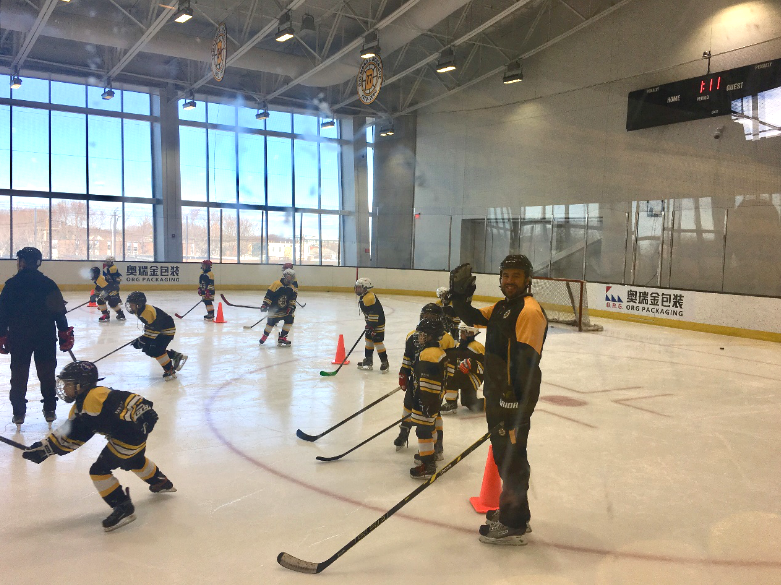 It’s no exaggeration to describe the campers’ Boston life as “Two Points & One Line”. After all, the most important “task” of the hockey minors was to follow the instructions from top hockey coaches of the Boston Bruins and learn the hockey skills. During most of the camp’s life, the campers shuttled between the encampment and Warrior Ice Arena, developing from the initial curiosity to gradual habits and to the final reluctance to leave. Perhaps only they themselves could know such a complex feeling.

Although the short-term centralized training did not bring quick changes to their hockey skills, the hockey minors, in Boston Bruins with the perfect minor training system, could experience the completely different training mode and even experience both tiredness and happiness from the interactive teaching style. Looking back the two winter camps’ hockey training, Boston Bruins Winter Camp’s coaching team led by legendary stars Andrew Raycroft and Andrew Alberts had tailored systematic detailed daily training programs for Chinese hockey minors long before the camp. These coaches with many years of experience in minor players training not only hoped that the campers would master the hockey skills and techniques in the centralized training cycle, but also hoped to plant a growing seed in the young hearts of the campers and let them redefine the sport under the guidance of the “Happy Hockey” concept and then enjoy it. 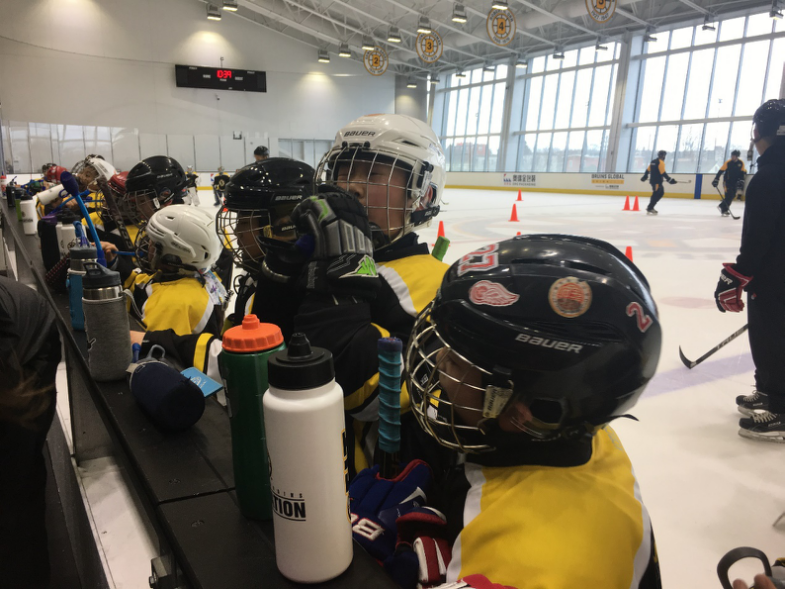 Therefore, regardless of Washington Camp or Boston Camp, each time of hockey training was a sea of joy and excitement. The sound of the bat, the friction of the knife and the ice, the cheering sound, the shouting sound, laughter, coach instructions sounds… were heard above the ice fields every day. We had to sigh the “experienced” coaches of the winter camps, because they knew how to make the training subjects fun and interesting, and they often became “Funny Men” to play with the campers. It also allowed the campers who were intoxicated to directly forget the heavy training every day. When the Chinese and American minors competed fiercely on the court, parents watching the game on the sidelines or through the activity group in the country were much more nervous than usual. The changing situation on the field is affecting their hearts. This scene was commonplace during the winter camp. 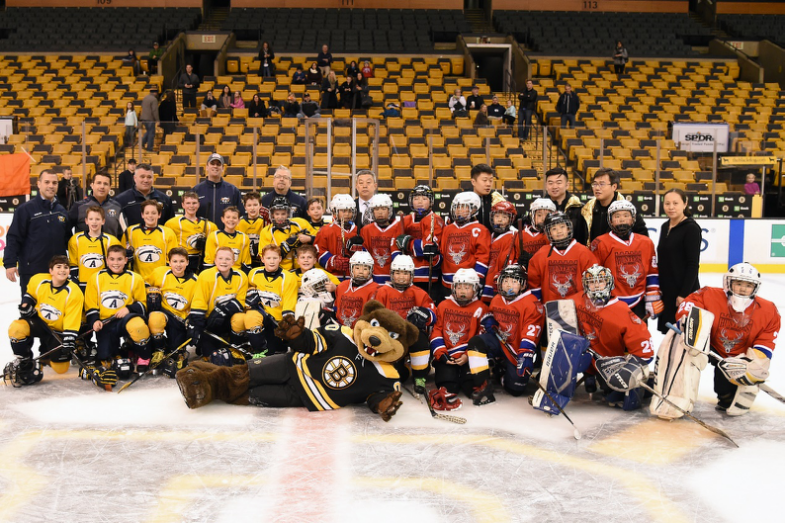 In the five Sino-US minor matches in the eleven days, the Chinese minor corps composed mainly of the Aozhong Hunter Hockey Team encountered different teams such as Andvoer, Cape Ann Youth Hockey Squirt, Boston Jr. Eagles, and Allston-Brighton Warriors. Although the strength of the opponents varied, everyone might amaze at the Chinese minor players’ determined spirit. If the first two games of the two winter camps were Mars hitting the Earth, then the last Chinese VS American minor confrontation at the TD Garden, home court of Boston Bruins, completely allowed the Chinese hockey minors to experience an NHL star treatment. Although there were not many audiences in these two games, they were completely in line with the NHL game format. The campers waited quietly in the player channel, made brilliant appearances at the moment when the live broadcast called out their names, and stood solemnly on the blue line with the teammates upon hearing the national anthem. Every time a goal was scored, the iconic celebration music and screams resounded throughout the audience. The live broadcast of the panoramic game and the playback of the goal were performed on the big screen at the scene……Many people had difficulty in having such an extraordinary game experience in their lifetime. In the words of the coach, maybe many children had only one chance to really stand on the NHL professional field in their lifetime. Looking back at the Chinese and American minor exchange games during the winter camp, the tenacious and hard-working spirit of Chinese minor hockey players not only made the opponents and the coaching team admired, but also kept the accompanying parents and staff very happy. As the saying goes, for hockey minors, mutual competition was the best way to know about each other in the court. The off-court handshakes and communications were a true portrayal of the hockey minors’ friendship. They learned from each other and made progress with each other in the game. O.R.G. hopes that campers can accumulate experience and gain growth in these games. As a Chinese company that continues to lay out in the hockey sports field, O.R.G. Packaging not only hopes to create a growth environment for Chinese minor hockey players through the “going out” and “bringing in” mode, but also hopes to organize events such as winter camp and NHL China Night, so as to help minor hockey players better understand the hockey sports culture of the world powers, to stimulate their enthusiasm for learning hockey and their love for the sport, and thus to inject a positive energy into their hockey paths. In keeping with this starting point, since O.R.G. had first held the China Night with Boston Bruins at the NHL venue in 2016, O.R.G. hopes to create a full-scale NHL event experience activity for Chinese young hockey players through this theme celebration. At the TD Garden on the evening of February 10, Boston local time, when the curtain of the O.R.G. China Night slowly rose, the two nights of the NHL were transformed into the home court and arena of the Chinese minor hockey players to show their charm. Those minors met the fully armed home team star High Five in the playing channel, and kicked off the game at the central NHL stadium, watched the game at a close position on the players’ bench, and celebrated with the players who scored the goal; greeted the audience from the Chinese dream-seeking minors on the ice-skating car resting on the inter-office; and watched their figures appear repeated on the big screen; appeared in the cheers of the audience to display the charm of Chinese minor hockey players and feel the atmosphere of the NHL stadium and the audience’s enthusiasm for hockey sports…

Chinese minor hockey players made brilliant appearances in different roles and identities in different sessions of the NHL stadium. The extraordinary experience at that moment made dream into reality, and would surely leave an unforgettable memory on their future hockey dream-seeking tour. For campers, intense training and games accounted for most of the entire winter camp life. In the rare relaxation and leisure time, experiencing the customs of Washington or Boston and the natural historical human landscape was definitely the best choice for the campers to broaden their horizons and add to their knowledge. On the campuses of Harvard University and the MIT, minor hockey players could not only feel the world famous school style and strong academic atmosphere, but also be encouraged to work hard and join them. More importantly, during the Boston Bruins Winter Camp, the game coincided with Beanpot Tournament - the most famous annual inter-school hockey event in the Boston area of the United States. The tournament, founded in 1952, is the annual hockey event most valued by Boston College (BC), Boston University (BU), Northeastern University (NEU) and Harvard University (HARVARD). The trophy that won this event is definitely something that these four universities are proud of. Therefore, the campers at Boston Bruins Winter Camp were fortunate to watch the preliminaries and finals of the tournament at TD Garden. While witnessing the elegance of famous American universities’ hockey teams, they also got close to their dreams in the field and tried to participate in the game. In addition, the visit and experience at the New Balance headquarters also allowed campers of the Boston Bruins Winter Camp to witness the perfect application of the latest technology in the field of sports. Watching the Celtics and Pacers’ NBA games at TD Garden allowed the campers to have a more intuitive understanding of North American sports culture outside of ice hockey. Different cities present different landscapes. On the road of the hockey dream-seeking tour, O.R.G. not only spared no effort to create all the conditions and opportunities for minor hockey players to improve their skills, but also helped them discover and explore the world in a variety of theme visits and experiences. In addition to NESN’s live broadcast of the O.R.G. China Night celebrations and matches, during the 2018 O.R.G.-Boston Bruins Winter Camp, domestic and foreign media focused on and rushed to report the Chinese minor hockey player. The stronger the youngsters are, the more powerful China will be. Under the background of building a strong ice and snow country and creating a good growth and development environment for young hockey players have become the consensus of schools, parents and society in China. O.R.G. will also continue to work hard, and constantly integrate international high quality hockey resources, and create more opportunities of “going out” and “bringing in”, so as to tap the potential of excellent Chinese minor hockey players, improve their competitive strength, and contribute to the development of China’s minor hockey sport.