Scientific management + cost-effective transfer, the key to nirvana and rebirth

After ten years of ups and downs and hardworking, AJ Auxerre finally returned to the Ligue 1 and returned to the top platform where the club has shined countless times. This upgrade is the best reward for the club’s adherence to football laws and youth training traditions, intensive cultivation and continuous investment. Back to the familiar stage is just the beginning, and a new chapter that belongs to AJ Auxerre is gaining momentum. On the occasion of this upgrade, we will take stock of the club’s revival and nirvana in recent years. This club with 116 years histories will move forward to new glory! In this article, we will focus on the management and operation of the club. 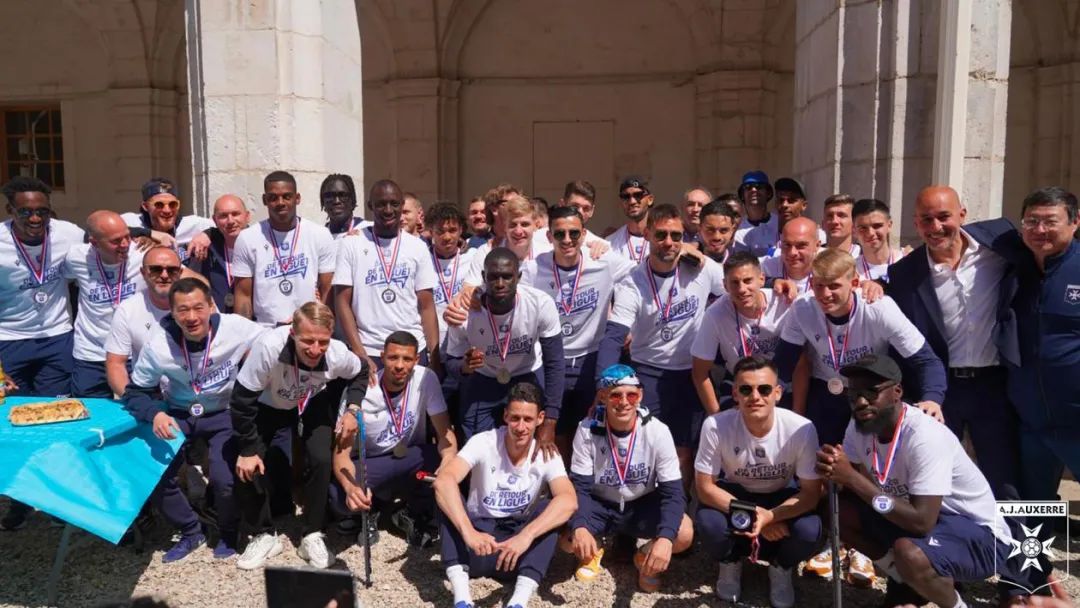 In addition to the unremitting efforts of the coaches and players to exchange for victories and help the team move forward on the road back to Ligue 1, the overall operation of the club has also become a key part of AJ Auxerre’s revival. In recent years, we use scientific operation methods to help the club regain its former glory! AJ Auxerre is a club with a long history and brilliant record in French football. It won the Ligue 1 championship in 1996 and was crowned the French Cup four times; In the intercontinental arena, the team has reached the quarter-finals in the Champions League and the Cup Winners Cup, and has also advanced to the semi-finals of the UEFA Cup (predecessor of the Europa League). The team has experience in as many as 130 intercontinental games. The famous coach Guy Roux, whose record of 44 consecutive years of coaching is unprecedented in international football, and it will be difficult for anyone to come after that.

Despite the ups and downs in the past ten years, the desire to return to the top has never changed. AJ Auxerre is always hopeful and active in his dormancy. In October 2016, O.R.G. Group entered AJ Auxerre and became the largest shareholder of the club, marking a new page for this century-old store. After officially entering the Chinese-funded era, the new AJ Auxerre adheres to the idea of “professional people do professional things”, boldly innovates, pursues efficiency, and relies on a professional management team to run club affairs. While respecting the laws of football and maintaining the original sound foundation, the new club executives have also made a series of optimizations to the organizational structure. Through the reform pilots of various departments, efforts are made to make the overall operation play the role of “1+1>2”. An example is the youth training system that AJ Auxerre is proud of. In the summer of 2017, Bernard David, who had worked for AJ Auxerre for many years, returned to the club as the director of youth training, and David Carre became the new coach of the reserve team. They have undertaken the task of supplying high-quality young players to the club’s first team, deeply cultivated young talents, and have achieved fruitful results in recent years.

In the transfer market, the club has taken a cost-effective route in recent years. The sale of the three youth training treasures of Ndika, Marcelan and Fomba brought more than 20 million euros in revenue to the club; At the same time, by dealing with redundant staff, salary space of the team has been reasonably optimized, and it has also paved the way for the arrival of reinforcements. The club has fully trusted the head coach Fran for the past three years, and it has also allowed the professional coach who had years of experience to successfully combine the players into a whole and maximize the overall combat effectiveness. In recent years, AJ Auxerre has made a lot of triumphs in the transfer market: in season 20-21, striker Le Bion became the Ligue 1 silver boot last season with 19 goals in 36 games; In the past two seasons, Autrey and Pelenal, who joined as free agents, have become important players of the team. Leon is among the best goalkeeper candidates this season. Ain and Chabonnier both have been selected for the league’s best team of the year. Chabonnier not only won the Ligue 2 silver boots this season, but ranks in the French professional league scorer list in the same period since their debut. Second only to Cavani, Mbappe, Ben Yedder and Ibrahimovic. After years of scientific operation and unremitting efforts of O.R.G. Group and club managers, AJ Auxerre has finally entered the fast lane of revival, and a bright future is at hand. Now, our first team and echelons at all levels have considerable combat effectiveness in their respective leagues, and finances of the club have continued to develop well. There is no doubt that the cooperation between AJ Auxerre and ORG is a win-win cooperation: AJ Auxerre has returned to the top league sequence, showing a huge appreciation potential; Through the careful operation of international high-quality clubs, O.R.G. has further expanded its brand awareness in the international sports circle, laying a solid foundation for the future development of the sports industry. Back then, I watched the peaches and plums drinking fine wine in the spring breeze. Later, the rivers and lakes were down and down. It has been ten years since we parted. I often listen to the autumn rain and miss you in front of the lonely lamp. Returning to Ligue 1 is a huge opportunity. Standing on a higher stage, AJ Auxerre awaits new opportunities and challenges ahead. We will continue to be down-to-earth and move forward steadily, and further explore in line with the characteristics of the club. With a unique management model, we will continue to exert our efforts in a scientific manner, and launch an impact on a higher level, and strive to keep this century-old store always at a high level at all levels!