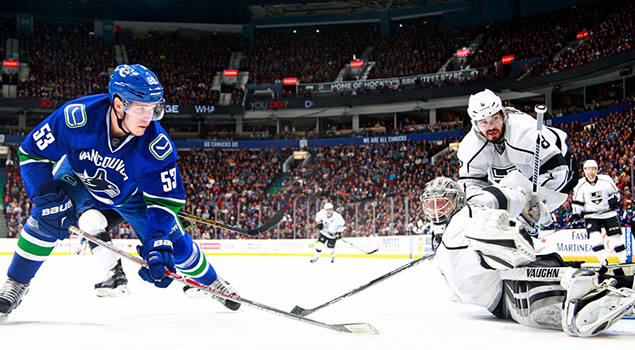 Before Editing:Although the Beijing 2022 Winter Olympics has not yet fully entered, ice hockey is growing rapidly in China, which has also attracted the attention of the National Hockey League (NHL). This world’s top ice hockey professional league, which celebrated its 100th anniversary this year, had also officially landed in China after the NBA. Indeed, there were commercial considerations for the Chinese market by the NHL, but more practitioners and those concerned about the development of Chinese ice hockey were are thinking about the story behind NHL’s entry into China, and what were the positive impacts of NHL China Games on the development of Chinese ice hockey? Therefore, before the official launch of the 2017 NHL China Games Shanghai event, we specifically interviewed Mr. Zhou Yunjie, the founding partner of NHL China Games and the Chairman of O.R.G. Packaging Co., Ltd.

As a former hockey player, Mr. Zhou Yunjie’s love for the sport could be seen from his words and demeanor when he talked about ice hockey. Although he was unable to continue the ice hockey career, he is now the helm of O.R.G. Packaging Co., Ltd., the largest and profitable metal packaging company in China. He is always concerned about the development of Chinese ice hockey. Captions: On May 14, 2017, under the promotion of O.R.G., some of the main players of the 1981 National Men’s Ice Hockey Team, which brought China’s ice hockey to the “boiling point”, once again gathered in Beijing and returned the brilliant Capital Stadium.

When talking about the history of China’s ice hockey, Mr. Zhou Yunjie said, “Although China’s ice hockey is not very competitive in the world, it has a wide range of sports foundations and historical accumulations in many provinces and cities in Northern China, such as Beijing, Northeast China, Inner Mongolia and Xinjiang. Nowadays, the generation after 50s and 60s were probably deeply impressed by World Ice Hockey Group C Championship held in Beijing in the early 1981, and the Capital Stadium had ignited the sports passion of Chinese people. Only those who had experienced that match could truly agree that the start of Chinese sports really came from the success of Chinese ice hockey team in Group B!” Caption: On May 15, 2017, O.R.G.·China Ice Hockey Friendship Tournament was staged in warmth. The two sides of the game were part of the 1981 National Men's Ice Hockey Team and some former members of the Beijing Shichahai Ice Hockey Team.

In the 1981 Ice Hockey Group C Championships mentioned by Mr. Zhou Yunjie, the Chinese team continuously defeated opponents from Denmark, Hungary, France, Bulgaria and other European and American, and promoted World Group B for the first time as the second. Among them, on March 14, the Chinese team created a miracle in the game against France. In the second game, they scored 4 goals in 5 minutes, making the International Ice Federation officials on the scene amazed. The next day, People’s Daily published an article titled Fighting and Brave, which also became a model for sports documentary reporting. Captions: In 2013, Mr. Zhou Yunjie accidentally watched an NHL competition in Boston and came up with the idea of promoting NHL’s entry into China.

In 2013, Mr. Zhou Yunjie accidentally watched an NHL game in Boston, also igniting his long-awaited ice hockey dream. He came up with the idea of promoting the NHL to enter into China. This idea was due to the fact that Mr. Zhou Yunjie had participated in many negotiations of NBA China Games. He had in-depth research and understanding of the mature commercial sports operation system in North America. Mr. Zhou Yunjie said in an interview, “The reason why I want to introduce NHL to China is not only to hope that Chinese ice hockey enthusiasts can witness the speed and passion of the world’s top ice hockey events at home, but also hope to popularize this sport in China, so that more and more people understand, participate in and fall in love with hockey!” 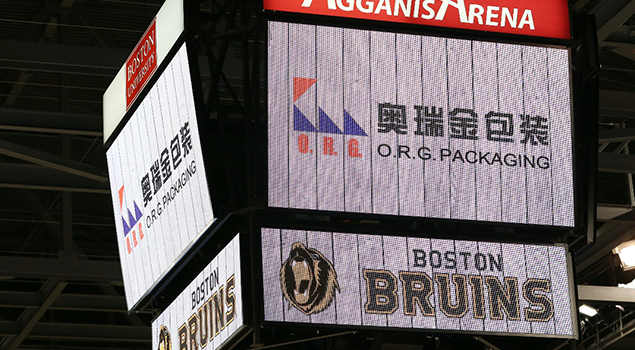 Captions: On November 18, 2015, O.R.G. signed a cooperation contract with the Boston Bruins and became the only marketing partner of Boston Bruins in China. Subsequently, O.R.G. also officially presented advertisements in the NHL court, and became the first Chinese company to land in the NHL Top International Ice Hockey League.!

Under the support of this idea, Mr. Zhou Yunjie and his O.R.G. Packaging officially contacted the NHL Alliance. After more than one-year communications and negotiations, in November 2015, less than four months after the success of Beijing’s bidding for the Winter Olympics, O.R.G. Packaging officially signed a cooperation agreement with Boston Bruins, one of the six founding teams of the NHL Alliance, and became the only marketing partner of the Boston Bruins in China. The two parties would work together to promote the development of ice hockey and minor hockey training in China. Captions: In January 2016, O.R.G. and Boston Bruins hosted the China Night. Chinese characters such as the Year of the Monkey logo, Peking Opera characters, and paper-cuts shone on the NHL court!

To explain the reason why O.R.G. worked with Boston Bruins on the training of minor hockey, Mr. Zhou Yunjie said, “In recent years, more and more children in Beijing play ice hockey. Many parents also support their children in this sport for the sake of their physical health or long-term academic planning, so we hope to North America’s top hockey education training system to China through cooperation with some NHL teams, so that the majority of Chinese hockey teenagers can benefit from it. Just at this time, the news came that Beijing had successfully applied for the winter Olympics, which further strengthened our confidence in the development of minor hockey.” In the subsequent two years, O.R.G. Packaging had cooperated with the Beijing Hockey Association and fully funded nearly 50 outstanding ice hockey teenagers to go to Boston Bruins and participate in the team’s official winter camp. While creating positive training opportunities for the hockey minors, O.R.G. also enhanced their understanding of North American ice hockey culture and improved their enthusiasm for learning ice hockey through the joint training and interaction between two teams’ active players and Chinese ice hockey minors, as well as Chinese hockey minors’ appearance at the O.R.G. China Night. 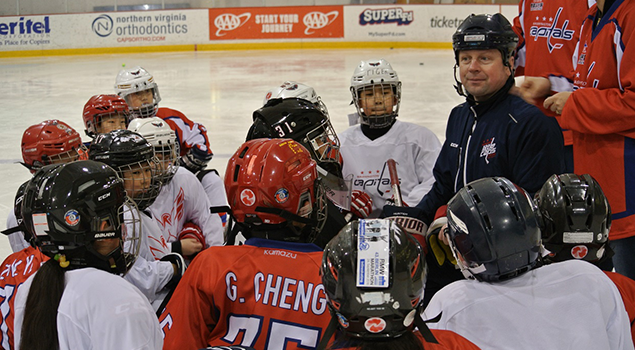 In addition to cooperation with Boston Bruins, O.R.G. continued to expand its collaboration with other NHL teams. In January 2017, in response to building “Hockey Business Card” in Beijing and actively promoting the development and popularization of the campus ice hockey, O.R.G. also fully funded two ice hockey teams from Zhongguancun No. 2 and No. 3 Primary Schools for their special training at the Washington Capitals team. In addition to funding outstanding ice hockey minors to visit the NHL top team for participating in the winter camp, O.R.G. also invited some Boston Bruins players and coach teams to visit China twice by taking advantage of the NHL offseason and China’s summer vacation. While interacting with Chinese ice hockey fans, O.R.G. allowed the hockey minors to receive the top ice hockey training in North America at home. Especially in the past July, the 2017 O.R.G. Boston Bruins Official Summer Camp was held in the newly completed Aozhong Ice Sports Club of O.R.G. for the first time. Speaking of this new ice rink, Mr. Zhou Yunjie said, “There are two prominent issues in the development of ice hockey in China. One is the talent, and the other is the venue. The fundamental solution to these two issues will not come in a day, nor will it depend solely on the state and government. Therefore, as a responsible enterprise, O.R.G. should also make a due contribution to the prosperity and development of China’s ice hockey. After carefully researching many ice hockey professional venues in the United States and Canada, we invested in the construction of this ice rink comparable to the NHL professional competition venue, hoping to provide a professional-grade sports venue for the minors who play ice hockey, so that they can better enjoy its fun.” 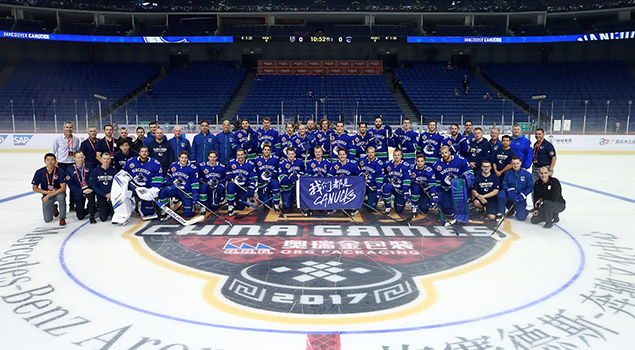 From the initiation of idea four years ago to the current hosting of NHL China Games, Mr. Zhou Yunjie is very familiar about the entire course. When talking about the role that NHL will bring to China’s ice hockey development after its introduction into China, Mr. Zhou Yunjie said, “Chinese people have strong learning ability. NHL entry into China can not only make domestic audiences watch the ice hockey events at home, but also allow more people to contact, understand and love the ice hockey sport. Meanwhile, the NHL Alliance’s long-standing ice hockey sports culture, excellent business operations and excellent talent training system have strong guidance and reference values to developing Chinese ice hockey and the ice hockey industry. Also, we hope that NHL entry into China may open a new era for the Chinese ice hockey and contribute to realizing the goal of ‘bringing 300 million Chinese people to participate in the snow and ice sports’.”